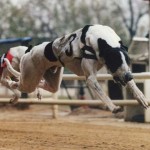 The semi finals of this year’s Yorkshire St Leger take place at Doncaster tonight, with the twelve remaining greyhounds in the competition all bidding for a place in the in the final in front of the Sky Sports cameras. In the current ante post market, the bookmakers are struggling to split the front two, with Millwards Teddy and Farloe Tango both on offer at odds of 9/4. Charlie Lister’s Farloe Tango had been the clear market leader prior to the first round but he was beaten at very short odds on by Rearguard Bond in the first round, and the layers now seem a little happier to oppose. Conversely, Millwards Teddy jumped to the head of affairs following an impressive opening round win last Saturday night, clocking a time of 41.38 in the process. These two talented greyhounds have been kept apart in the semi finals, and they both look likely to win their respective semi finals this evening.

Farloe Tango goes in the first semi at 8:34pm and looks to have the more difficult task in front of him, having been drawn in trap five with a very decent performer on his outside. Henlow raider Romantic Rambo kicked off his 2014 Yorkshire St Leger campaign with a victory last weekend and on paper at least, looks the bigger threat to the market principles. Trainer Kevin Cobbold appears to be a very likeable chap and he was very disappointed when this dog missed the Ladbrokes Golden Jacket earlier in the season due to injury. Romantic Rambo has been relatively lightly raced since, but has clearly been aimed at this prestigious tournament. A repeat of the 41.70 Rambo put up in the first round could well be enough to progress and he has the best of the draw, wearing the striped jacket. He’d be my tip for anyone looking to have a bet in the outright market at this stage.