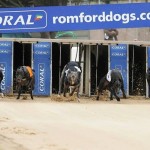 The RPGTV cameras head to both Romford and Sunderland this evening for two 13 race cards, including 10 open races at the northeast London track. There are early odds available on a selection of the races on Romford’s card from a handful of the bookmakers, with the 9:56pm, 10:11pm, 10:26pm and 10:40pm all having been priced up. All tonight’s action can be seen live on Sky Channel 212, or Freesat channel 401. Alternatively, you can see any races covered by the Racing Post Greyhound TV cameras live for free via the Betfair. Here are our best bets from this evening’s dog racing.

9:56pm Romford
Bet365 go a stand out price of 6/4 about the Mark Wallis trained Blackstone Marco here, and I think those odds are well worth snapping up. I can see this greyhound going off at nearer the even money mark come race time following three victories in succession, including two very impressive wins at Henlow. The plum draw in trap one should ensure that Marco gets the better of kennel mate Aayamzamodel on his outside, with this bitch looking like the biggest threat to my selection.

Back Trap 1 Blackstone Marco at 6/4 with Betfair

10:11pm Romford
While Ernie Gaskin’s favourite here Bishops Wood would have claims, I do think this looks like a wide open race and there could be merit to opposing the market leader. The interesting runner for me at a price is another Mark Wallis inmate in the shape of Toosey Fern. The orange jacket won over course and distance here in July and has been kept off the track since that month, with just a few trials during September. She could well be primed for this return to competitive action and I’ll be taking the 6/1 available with bookmaker Betfred.

Back Trap 5 Toosey Fern at 6/1 with Betfred

10:40pm Romford
I’m sidestepping the 10:26pm as it looks like it has the potential for various amounts of trouble in running, and end tonight’s selections with the final race on the Romford card. The three and five dogs look the most solid options on paper, but neither are exactly world beaters and I feel that they are worth taking on with potential improver Mays Petal. She got no kind of run when finishing second to Flawless Floyd here back in June and I’d fancy the runner from the Dolby kennels to reverse that form tonight. When you consider that Mays Petal is on offer at double the price of Flawless Floyd, it’s a no brainer for me.

Back Trap 1 Mays Petal at 5/1 with Betfred